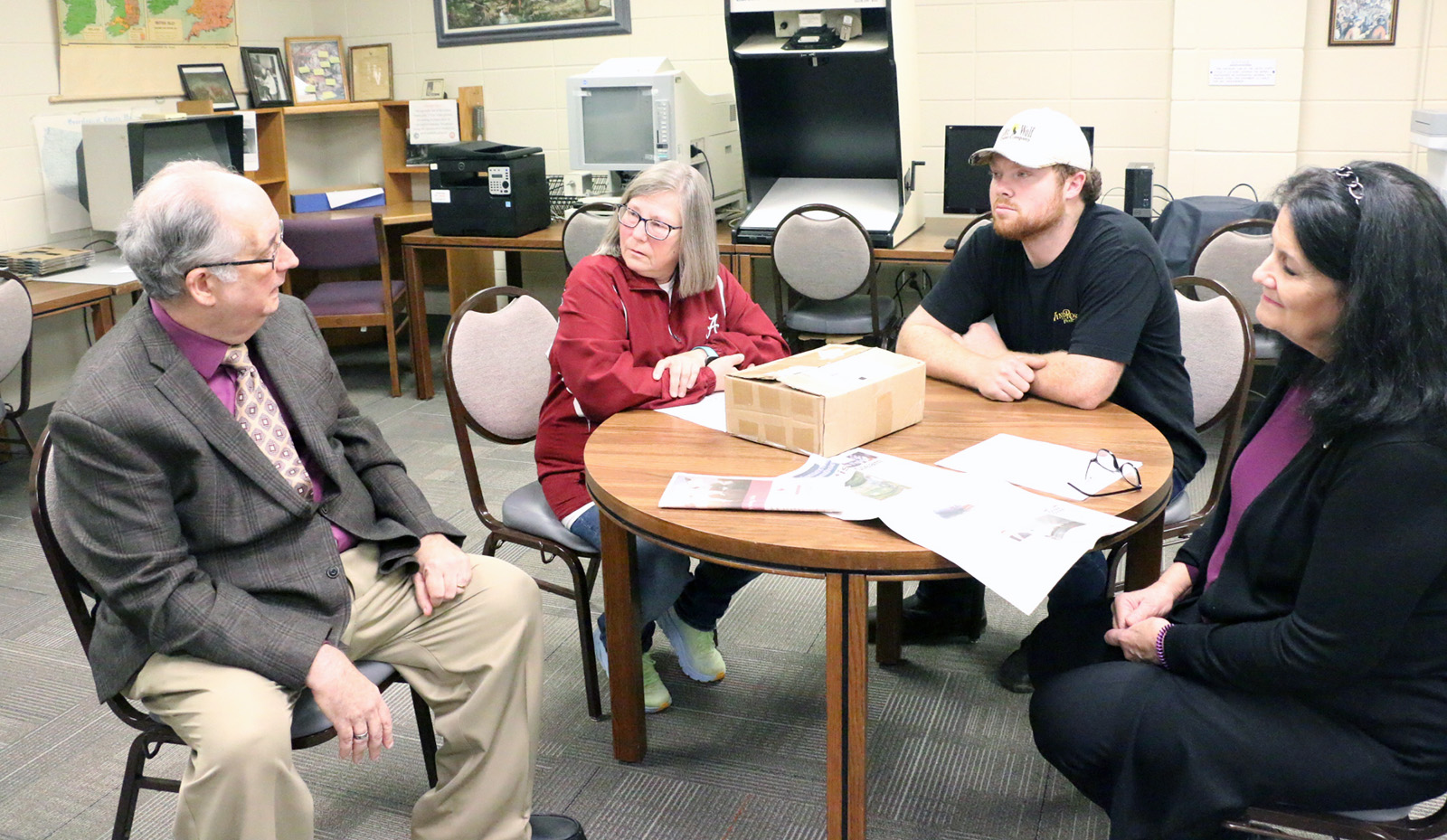 Mother and son, Cindy and Eric Mullican, center, meet with Robert Davis, left, and Tanya Shearer, right, of the Wallace State Genealogy department, whose research put a box of personal effects belonging to WWI solider Private Oliver Buchanan back into their family’s possession. Buchanan died in battle during World War II. He was the brother of Cindy’s mother, Phyllis Buchanan Nesmith.

HANCEVILLE, Ala. — Thanks to extensive research provided by the Wallace State Community College Genealogy department, a Purple Heart posthumously awarded to a World War II soldier and other personal mementos were reunited with his family in Marshall County 77 years after his passing. 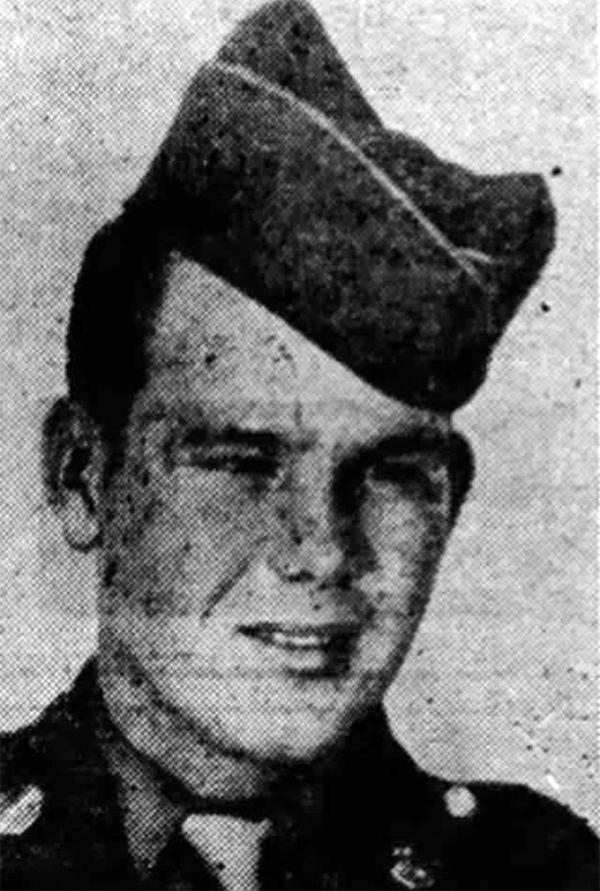 The medal and other items belonging to Private Oliver Buchanan Jr., including photographs, were found by a Cullman County man who was renovating a house in Fairview. The items were found in a box from the War Department addressed to a Mrs. Laura N. Buchanan, Route 2, Arab. The box contained a boxed Purple Heart, a Combat Infantry Badge, khaki garrison cap, wristwatch with a leather band, ring, cigarette lighter, ink pen, pocketknife, and a leather wallet that held five faded black and white photos and his social security card. One photo shows a soldier, possibly Private Buchanan, with two people; another shows a woman with a small child. Three other photos are individual portraits of a soldier, and two women. No names are marked on any of the photos.

The label on the box had Private Buchanan’s name listed as Private Oliver J. Buchanan and his service number, giving the researchers their starting point, along with the name and address of the recipient, who in this case turned out to be his young widow. 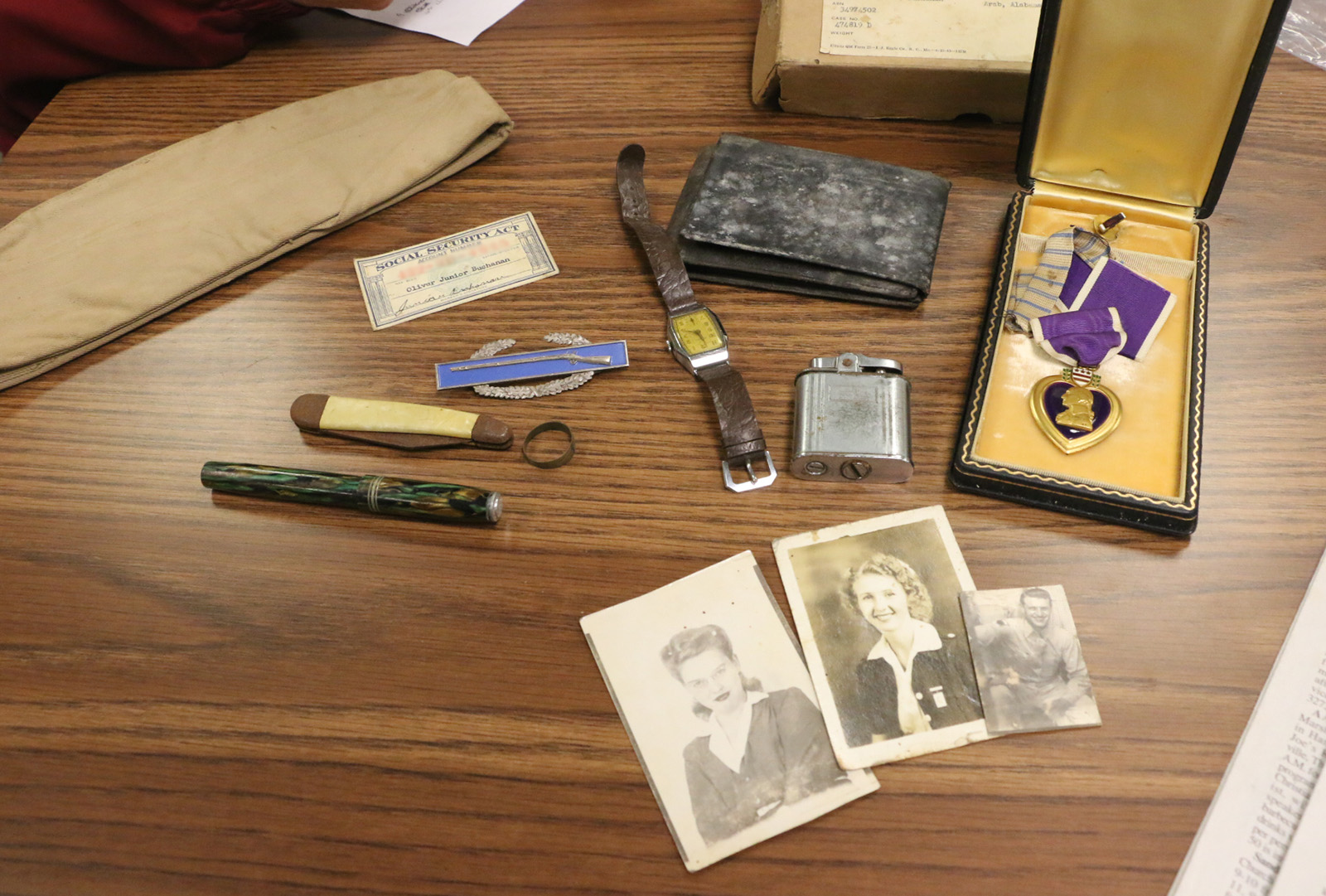 “It’s like a time capsule,” said Tanya Shearer an assistant in the Genealogy department who helped in the research and recounted the information she discovered about Private Buchanan. He enlisted in the Army on January 20, 1944, on his 18th birthday. The couple married in September 1944, and he was killed six months later in March 1945 at the age of 19.

Research shows Private Buchanan died at a field hospital in Luxembourg, Germany, on March 7, 1945, from battle wounds he received two days earlier. Tragically, his older brother Pfc. Joe Dave Buchanan died in Germany in July of that same year at the age of 26. His death was not battle related, according to his military records. An article announcing the elder brother's death found via FamilySearch.org indicates both brothers served separately in Patton’s 3rd Army and were within 2 1/2 miles of each other in Luxembourg when Private Buchanan was killed in action. Joe reportedly wrote a letter home dated March 6, but he was unaware his brother had been wounded the day before.

An obituary published on April 20, 1945, in The Guntersville Gleam referred to Private Buchanan as “June” and listed as survivors his wife, his parents Mr. and Mrs. O.M. Buchanan, two brothers and six sisters. No names for his siblings were listed, so researchers turned to census records to find those names. From the 1940 census, when Oliver Buchanan was 14 years old, they found he and his older brother Joe had three other siblings living in the same household at that time, two sisters, Lois, 16, and Phyllis, 7, and a brother, Ellis Ray, 9.

Through Phyllis, whose name was misspelled on the census as Physouas, the researchers found an obituary for a Thomas NeSmith from December 2020, which listed Phyllis Buchanan NeSmith as his mother. From there they were able to locate Jamie Thomas, one of Mr. NeSmith’s children, to get these items back to Private Buchanan’s family. Mr. NeSmith would have been Private Buchanan’s nephew and Thomas his great-niece.

The discovery of the box and the items inside gives his relatives a look into the life of a man they never met but often heard Phyllis Nesmith speak of with love and pride.

“My grandmother would speak of him and that he had fought in the war and had died,” Thomas said. “She spoke very highly of him and was very proud of him and missed him.”

Thomas said she recalls photos of both of her Buchanan great uncles hanging on the walls of her grandmother’s home.

“I just wish Momma was alive to see this,” said Cindy NeSmith Mullican of Arab of her mother Phyllis, who passed away in 2014. “Not many days went by that she didn’t say how much she loved and missed them and how proud she was of their service. My mom, she was the youngest out of all of them, so all she remembered was he went away and didn’t come back.” Her mother would have been around 12 when the brothers died.

With how often her mother spoke of her older brothers, Mullican said she felt like she knew them. Now, she can see things her uncle Oliver used daily. 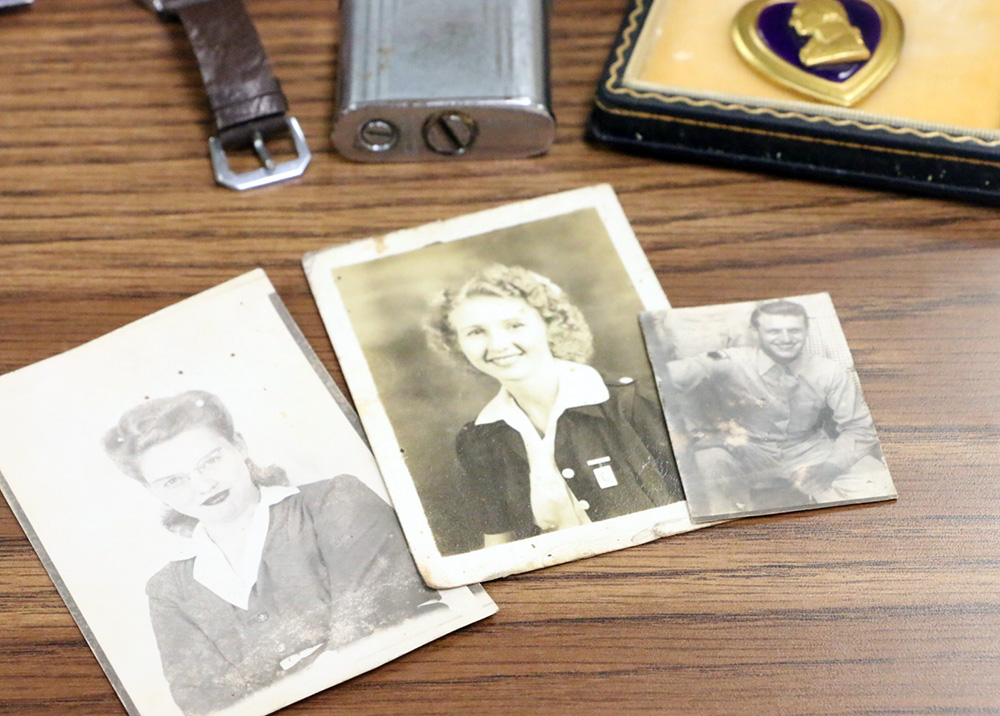 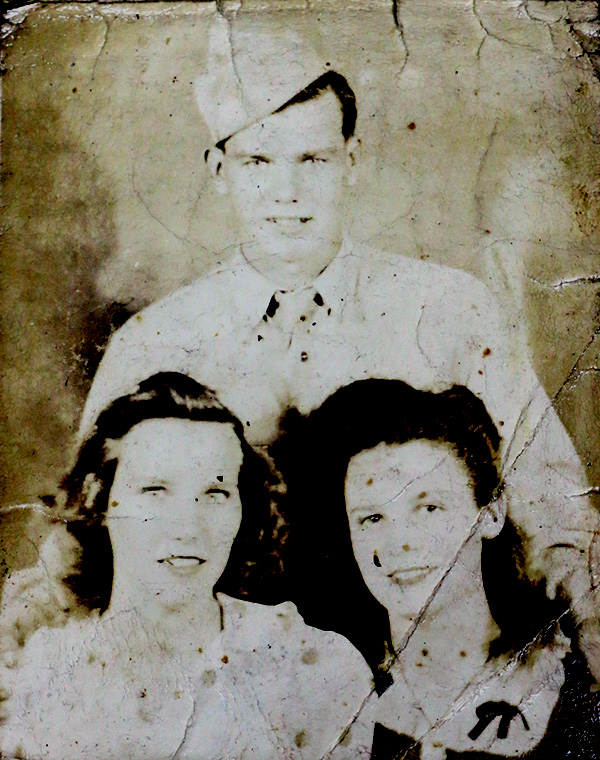 The box found its way to Wallace State via Physical Plant staff member Tim Sexton, whose father delivered it to him after receiving it from Kenneth Weldon. Weldon and his son found the box during renovations of a house his son owned.

“We were just cleaning up and found this box,” Weldon said. “It seemed kind of odd that somebody would just leave it and seem to have no connection to it.”

Weldon said he tried to do a little research about Private Buchanan but didn’t get very far. That’s when he decided to hand the box over to Sexton and the Wallace State Genealogical Department for further research.

“I’m glad to know it’s been returned to his family,” Weldon said.

“I’m glad you have it,” Sexton told Mullican when she and her son, Eric Mullican, visited Wallace State’s Genealogy department. “It would have been terrible for it to have been lost.” 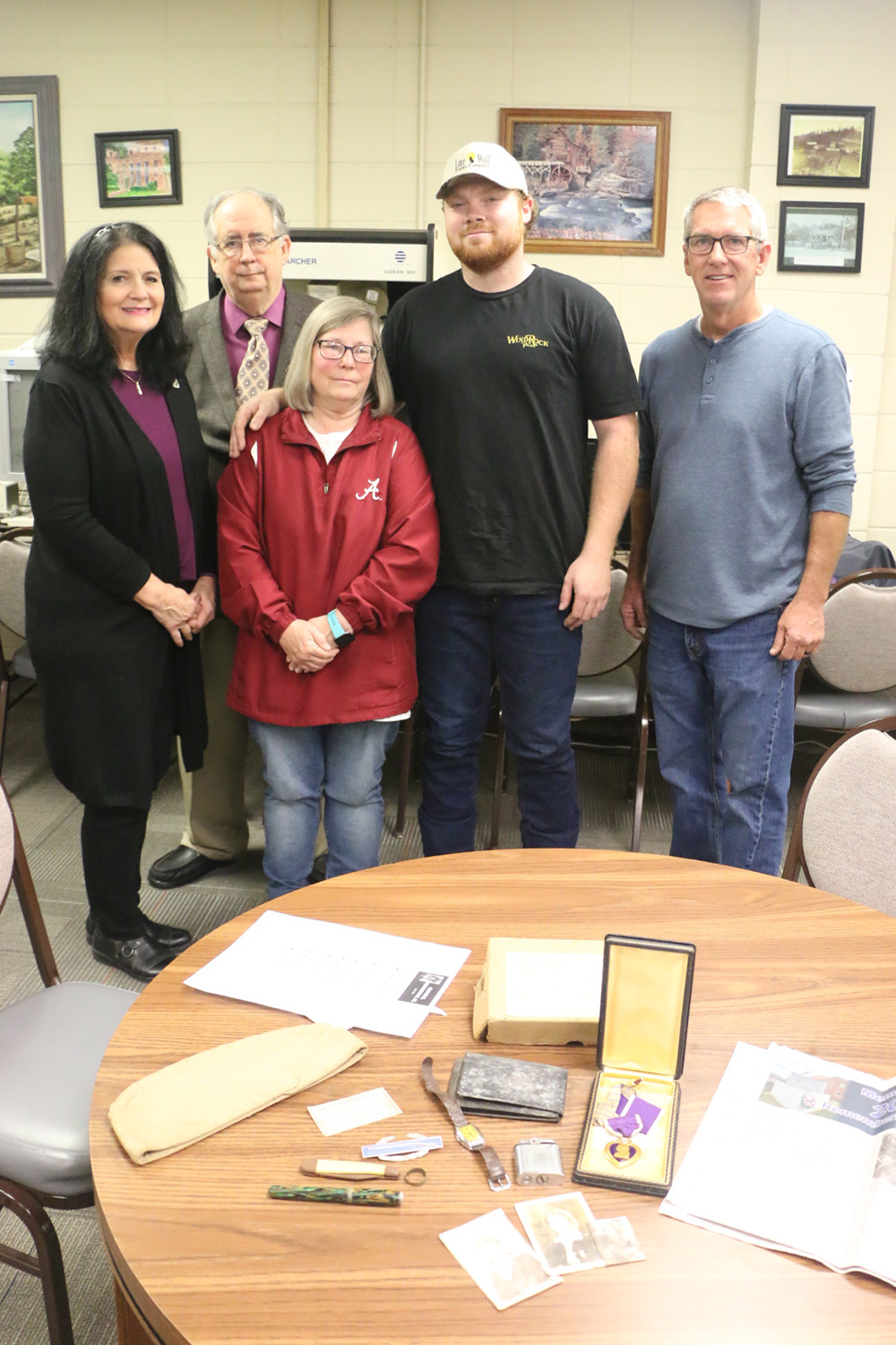 Wallace State staff meet with family members of the late Private Oliver Buchanan, who died during the latter months of World War II. A box of his personal effects was found and delivered to the Wallace State Genealogy department to track down his family and return the box to them. Pictured from left are Tanya Shearer and Robert Davis of the Genealogy department, Private Buchanan’s niece and great-nephew Cindy Mullican and Eric Mullican, and Wallace State employee Tim Sexton, who brought the box to Wallace State on behalf of Kenneth Weldon, who found the box while renovating a house with his son.

Once the WSCC Genealogy department received the box, Shearer searched historical records for information about Private Buchanan and found his draft record, his hospital admission card detailing his wounds and his record in the U.S. Rosters of World War II Dead. Along the way, she also found out about his older brother’s death and found the census records from 1940. Genealogy chair Robert Davis took over the search from there to find Buchanan’s living descendants.

Mullican provided more information about both Buchanan soldiers and their family, sharing an article from The Advertiser-Gleam from May 28, 2022, in honor of Memorial Day, recounting the story of the two brothers who died during World War II.

The battle in which Private Buchanan died was during the latter part of the war when his regiment was serving in the Rhineland region of Germany. “They took the town of Hosten on 3 March and Speicher on 5 March, or near there, where Oliver was severely wounded,” the article by Rhonda Tidmore, states.

The article also mentioned that the brothers’ bodies were returned to Alabama in October 1948. The bodies arrived by train in Atalla, and they were transported back to Marshall County. The brothers are buried side-by-side at Mount Olive Baptist Church Cemetery.

Mullican expressed her thanks to Welborn for finding and turning over the box of items to the college and thanked Shearer and Davis for doing the research to find and return the items to her family.

“It was an honor to do the research,” Shearer said. “I’ve never seen anything like this, and I thought what an incredible treasure.”

The Wallace State Genealogy department is open to the public. Located in the basement of the Wallace State Library, the public can access online records through sources such as Ancestry.com and newspapers.com. The department also has an extensive collection of materials on three floors of the library. Call 256.352.7857 or visit www.wallacestate.edu/genealogy for more information.

Genealogy classes are offered through Wallace State’s Center for Career and Workforce Development. Upcoming classes can be found in the Spring 2023 schedule. Courses are held over two days on Wednesday and Thursday, from 5 to 9 p.m. Classes scheduled for Spring include Introduction to Genealogy, Genealogy and the Computer, Southern Genealogy, Civil War Era Genealogy, and Advanced Genealogy and Book Publishing. The fee is $100 for each class.  Call 256.352.8386 or email ashley.baker@wallacestate.edu for more information or to register for classes.