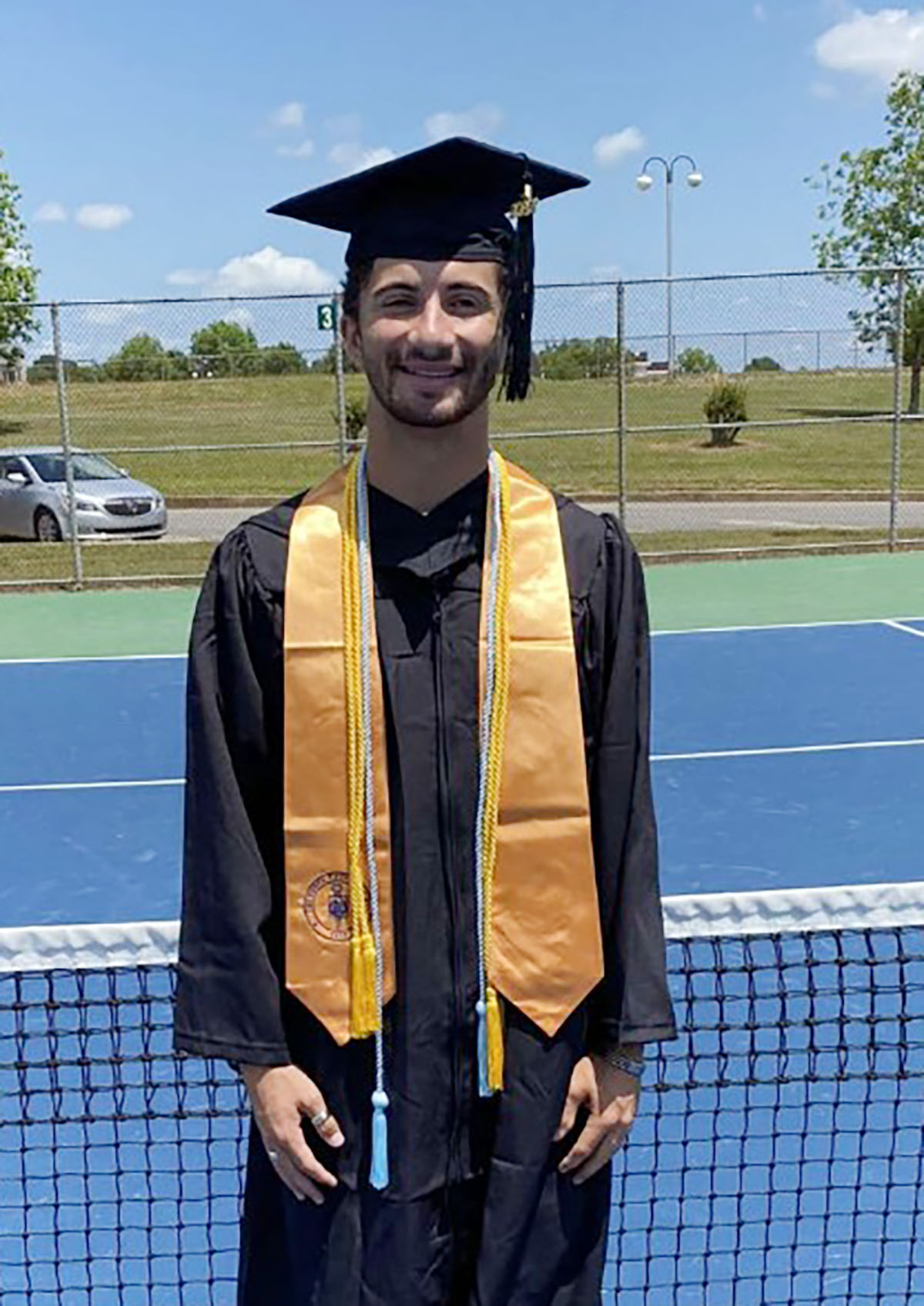 They say love means nothing to a tennis player, but when it comes to his new higher education home, Tristian Du Plessis is feeling the fondness.

Arriving at Wallace State Community College from Pretoria, South Africa, Du Plessis hit the ground running in Hanceville, committed to projecting as much passion in the classroom as he does on the tennis court. He would go on to achieve the academic equivalent of a straight-sets victory, earning enough credits to graduate in just four, super-charged semesters.

“It’s been a really nice experience,” says Du Plessis, who graduates this month. “Everyone here makes you feel so welcome.”

In reflecting on his whirlwind year at Wallace State, Du Plessis says the process of integrating into Lion life was virtually seamless. Within days of arriving on campus, the international student already began to feel at home.

“Within the first week, I was able to reach out and connect with people,” says Du Plessis.  “As an international student, you kind of get eased into everything.

Wallace State’s stress-free environment proved the perfect setting for higher education success. Whereas a bigger city or more hectic campus might have presented moments of distraction and despair, Du Plessis says Hanceville’s pace helped keep him on an even keel.

“It’s not as busy or overwhelming … when you’re comfortable, you can move on to the next step.”

Just over a year after arriving, Du Plessis is ready for his next move. As soon as he graduates, the South African native is northbound, slated to study psychology at Saint Michaels College in Vermont.

“Currently I’m in the general studies program, but I’m mostly focused on psychology,” he explains. “I’ll formally move into the psychology program [at Saint Michaels] where I’m also going to play tennis.”

As a member of the tennis team and part of the campus ministry, Du Plessis made the most of his short time at Wallace State. The experience, he says, has left him well-equipped to take the next bold step in his educational journey, and ultimately, his career. In the meantime, though, he still has some unfinished business between the white lines.

“I would like to coach, or even open my own sports psychology business with physiotherapy,” says Du Plessis. “But I want to give tennis a good chance.”

The team, led by coach Tim Garner, would go on to finish in seventh place at nationals, ranking as one of the top ten men’s junior college tennis teams in the entire country.

On-court accolades are nothing new in Hanceville. Across the board, the athletics teams at Wallace State boast a tradition of success, particularly in tennis, baseball and softball.

“Like, softball is one of the best in the country, tennis is top ten, baseball is doing really good,” details Du Plessis. “[Wallace State] isn’t just great on the academics side.”

The tennis team’s accomplishments have not only inspired Du Plessis’ spirit, but his career prospects as well. The soon-to-be alum plans to parlay his Wallace State experience into a tennis career, whether as a player or coach.

“I would like to give myself a good chance to make it in Tennis … join the ATP (Association of Tennis Professionals) Tour,” says the Lions lobber. “And if that doesn’t work out, or whenever I’m done with that, I would like to coach.”

As Du Plessis moves forward in his educational journey, he says he’s thankful, though not surprised, that Wallace State turned out to be such a supreme steppingstone.

“It’s a really, really good foundation,” says Du Plessis. “It gives you, as an international [student], the chance to ease into everything.”

When asked how he would describe Wallace State, Du Plessis pauses before confidently answering: “An open door for new opportunities.

“The professors are helpful; the people are so nice. The culture is really nice … Southern hospitality is great!”

Even beyond the helpful faculty and strong sport programs at Wallace State, Du Plessis says it’s the welcoming community and persistent resources that made it such a consummate environment for an international student like himself.

If Du Plessis has one piece of advice for future students, it’s to avoid being swayed by the community college stigma: “Don’t get caught up in the fact that it’s called a junior college,” says the loyal lion.

“I personally think [Wallace State] is one of the best junior colleges that there is.”