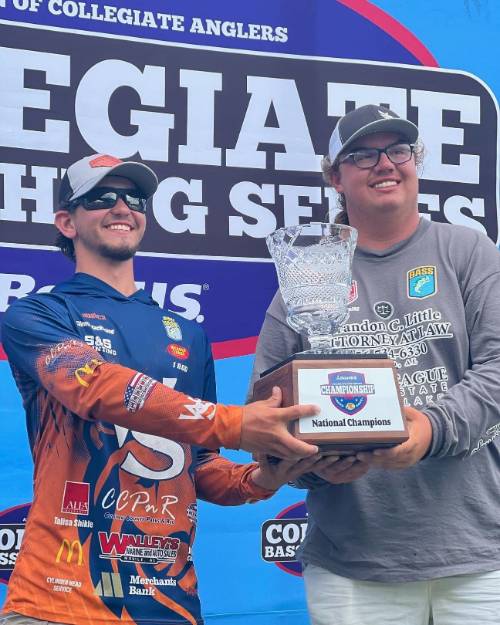 HANCEVILLE, ALA. – Wallace State anglers Bryar Chambers and Clent Blackwood have fished together as the college’s top duo for two seasons.

The talented pair secured their first major championship on Friday.

Chambers and Blackwood finished with a two-day total of 10 fish, weighing 46.91 pounds, finishing directly ahead of teams from Auburn University, Drury University and East Carolina University.

They opened the event with five fish, weighing 23.66 pounds, and nearly matched that total on the second day.

“It’s a once-in-a-lifetime opportunity to go out and win a championship. It makes all the time we spend on the water worth it. There’s not much more we could ask for,” said Chambers, a Fairview native. “It feels awesome to win an event on this circuit.”

Added Blackwood: “There are no words to adequately describe the emotions. You go through a tournament and experience the ups and downs and hope you did enough. We’re thrilled.”

Blackwood is a resident of Logan and fished for West Point High.

Both Chambers and Blackwood added they entered the tournament believing they had an advantage because of their familiarity with a body of water located a little more than 100 miles from Wallace State.

They’ll continuing fishing in the Collegiate Series on June 10-11 at Saginaw Bay in Bay City, Michigan. Last June, the duo led after the opening day at Saginaw Bay.

“We didn’t want to repeat at Pickwick what happened to us last year at Saginaw Bay. That makes the championship even more satisfying. We took control and didn’t put too much pressure on ourselves,” Blackwood said.