“Congratulations graduates,” said Dr. Karolewics. “Today, we celebrate your success, and we excitedly anticipate tomorrow as we watch your journey continue to unfold.”

More than 1,300 individuals earned degree or certificates as part of the Class of 2022. More than 550 participated in the two ceremonies on Friday.

“Graduates, you are the future of our state, the workforce of the future,” Dr. Karolewics told them. “As you embark on the next chapter of your life, may the education you have earned at Wallace State, one of the top community colleges in the nation, inspire you to be innovative, seek opportunity, and influence your world for the better. Continue to set your aspirations high and to be a role model to others.  On whatever scale you act, you have the power to make a difference. And we know you will.”

Dr. Karolewics shared the stories of several graduates during the ceremonies, “because they embody the richness and diversity of the students we serve and the dreams that each of you has for your future.”

General Studies graduate Cutter Green was presented the Presidential Award for Academic Excellence during graduation ceremonies Friday at Wallace State Community College. Green was also the recipient of the President’s Cup, which was presented at an Honors Ceremony held in April. 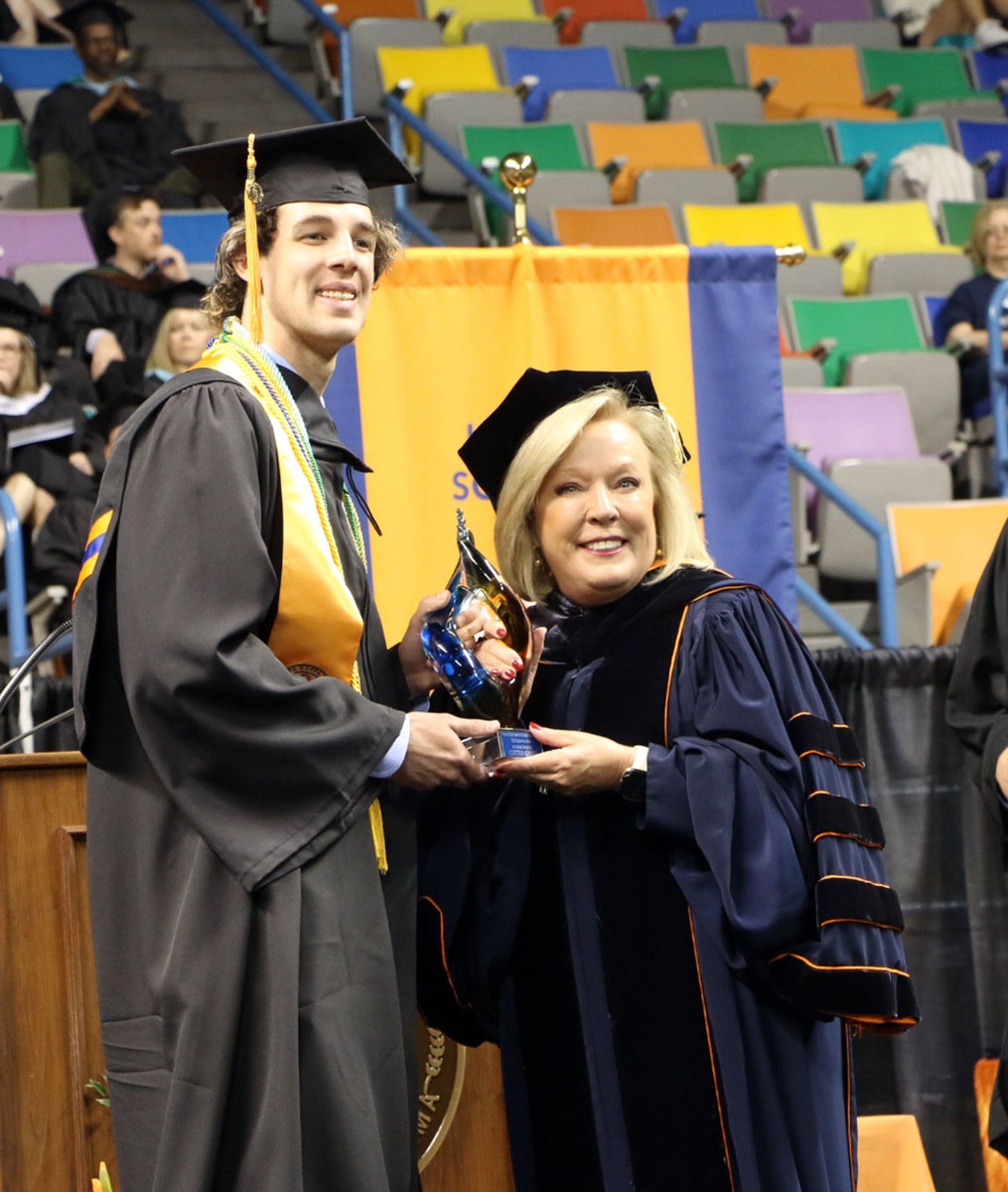 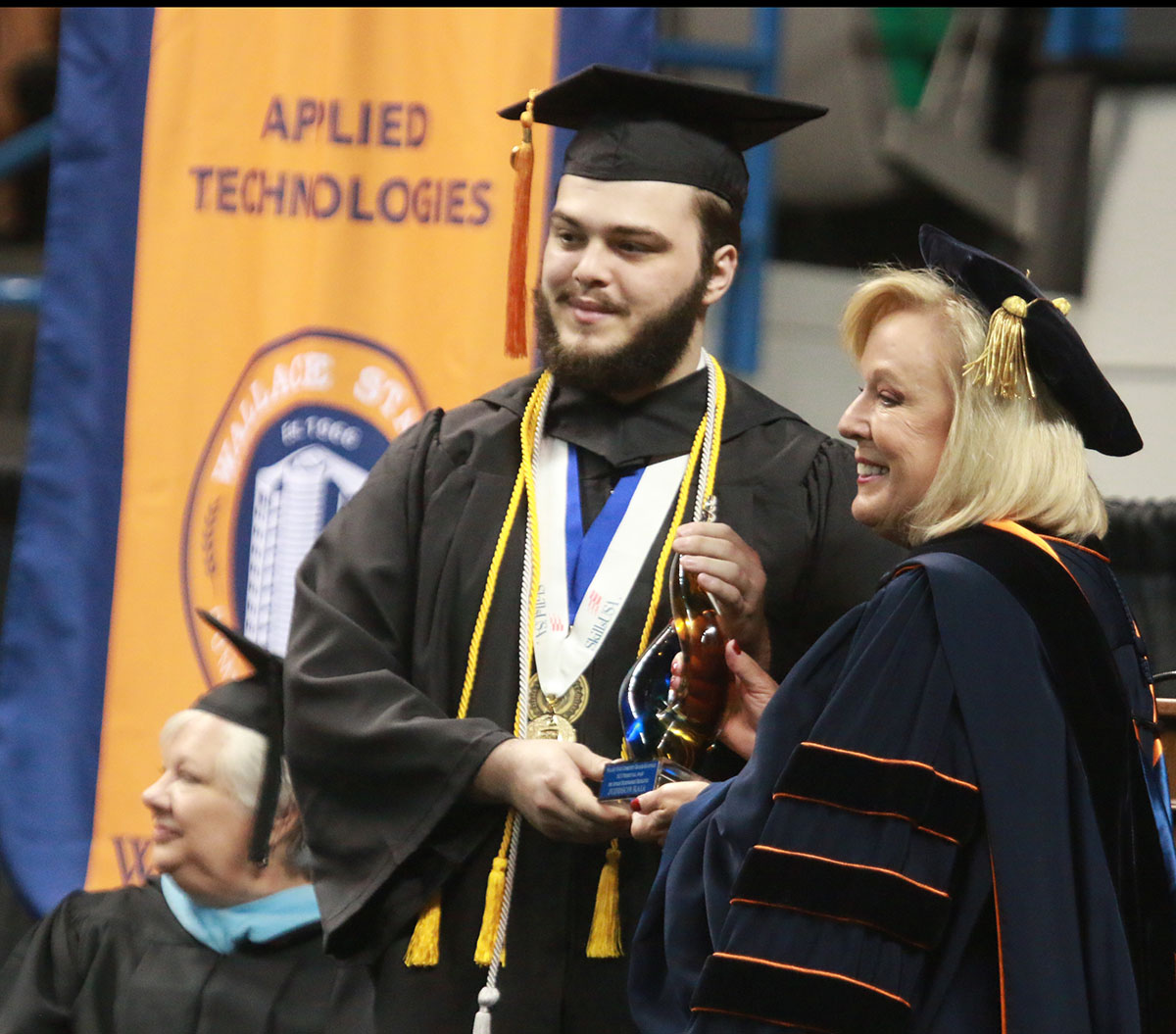 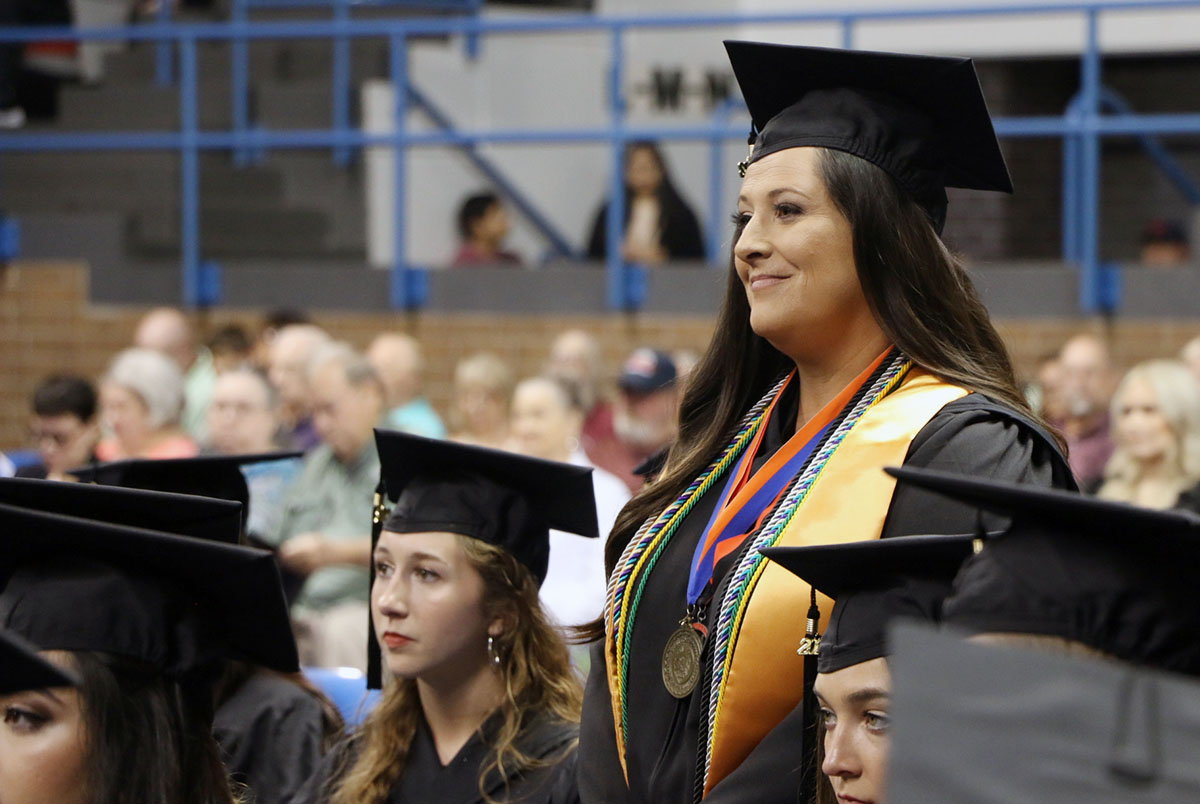 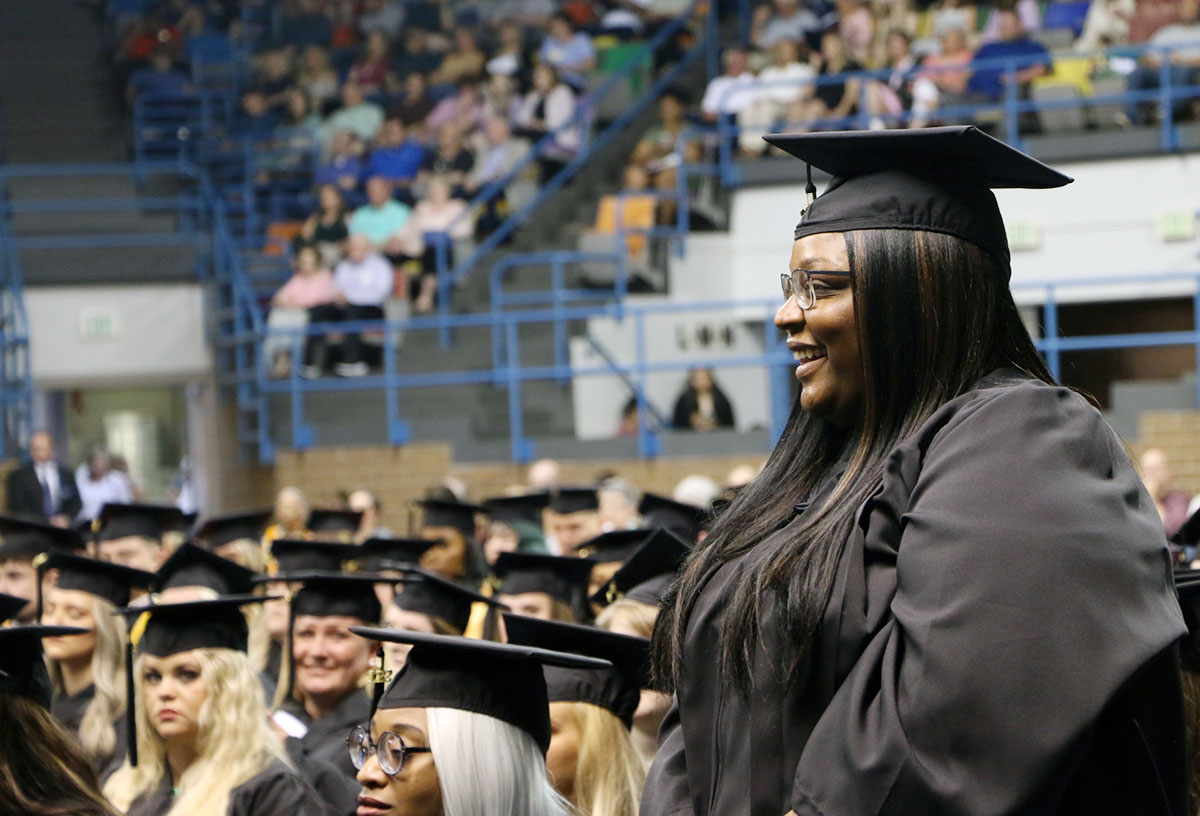 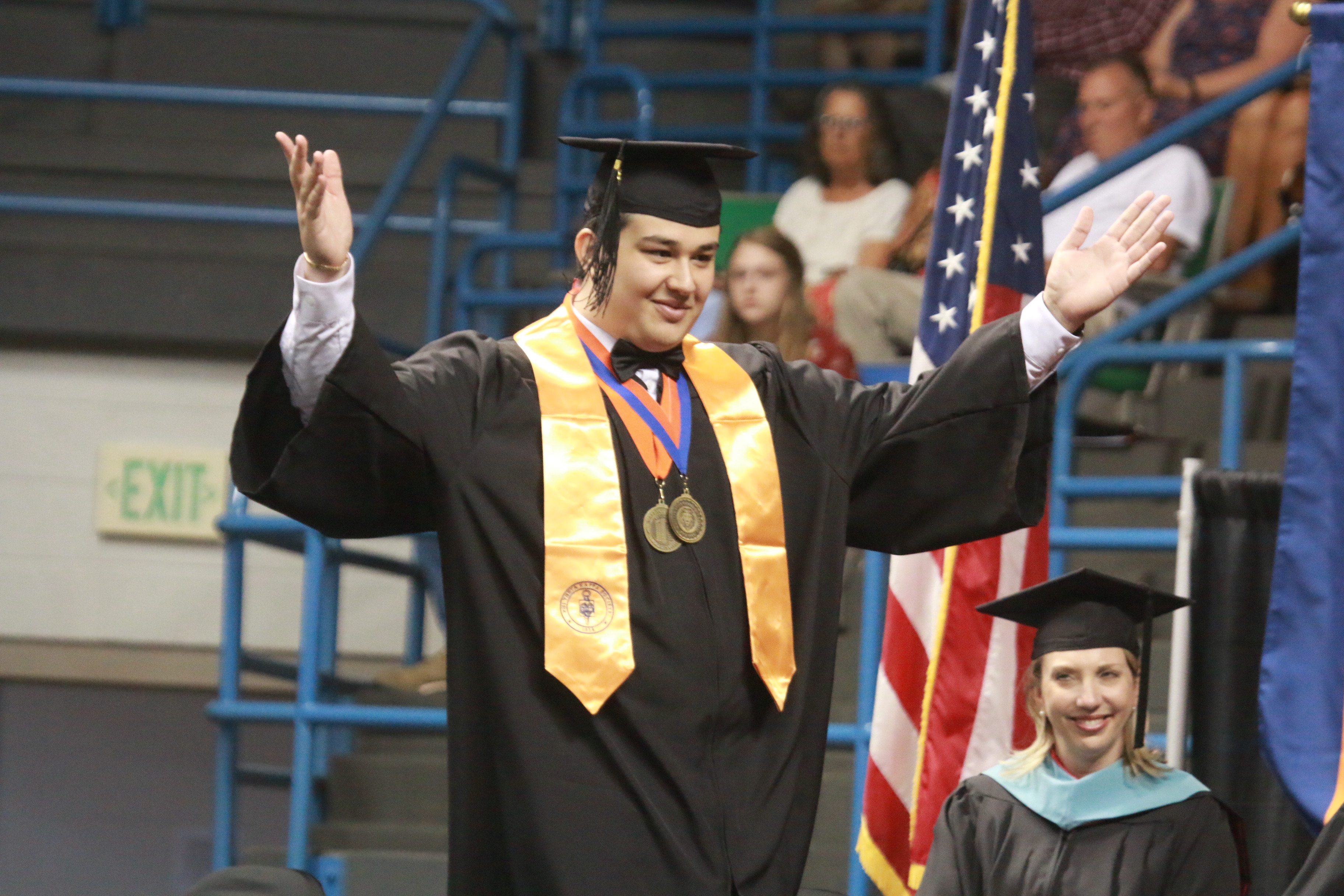 Dental Assisting graduate Samantha Herrera reacts to a family member in the audience during the Health Sciences graduation. 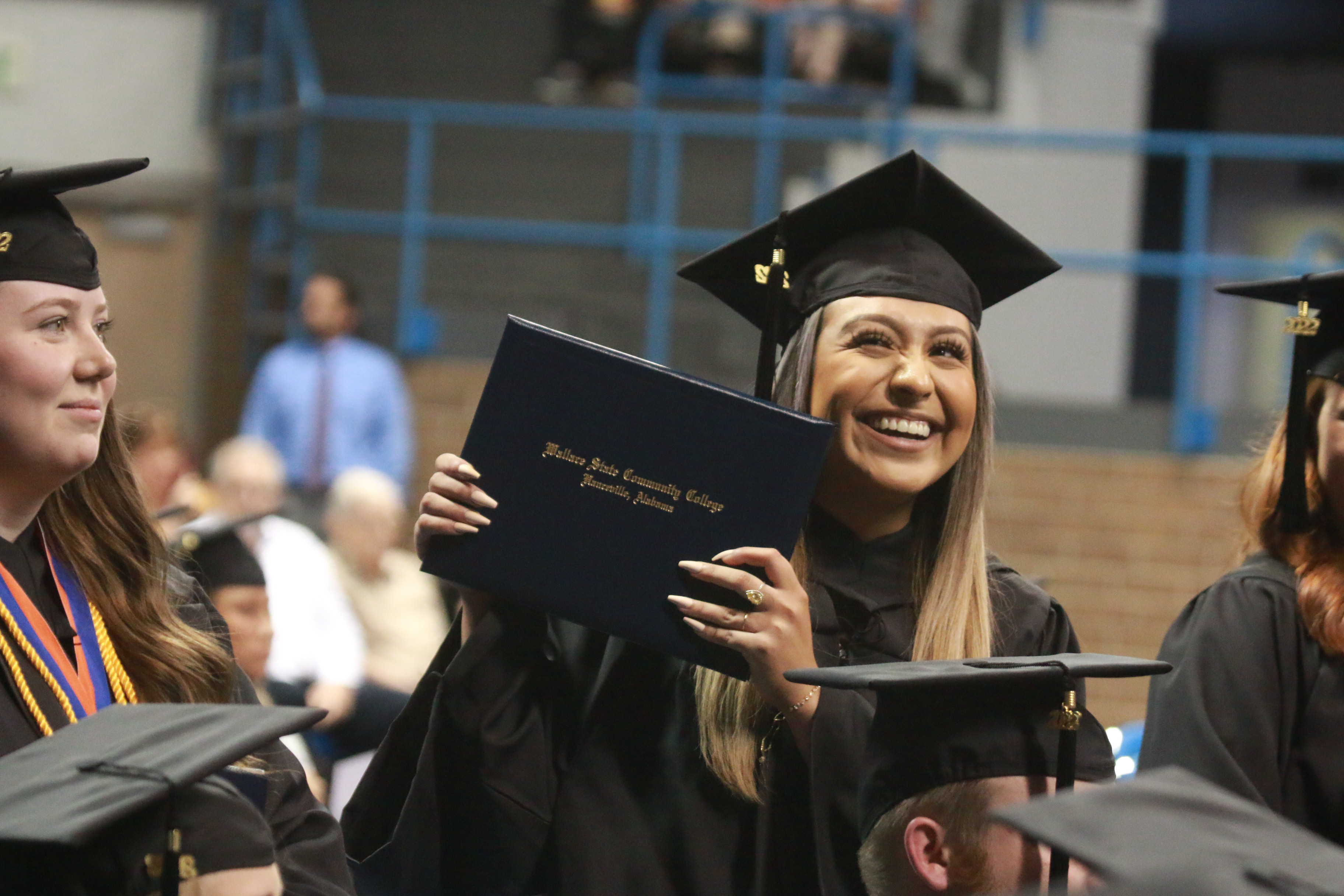 Wallace State graduate Austin Riddle acknowledges his family in the crowd after the Academic/Applied Technologies graduation was complete. 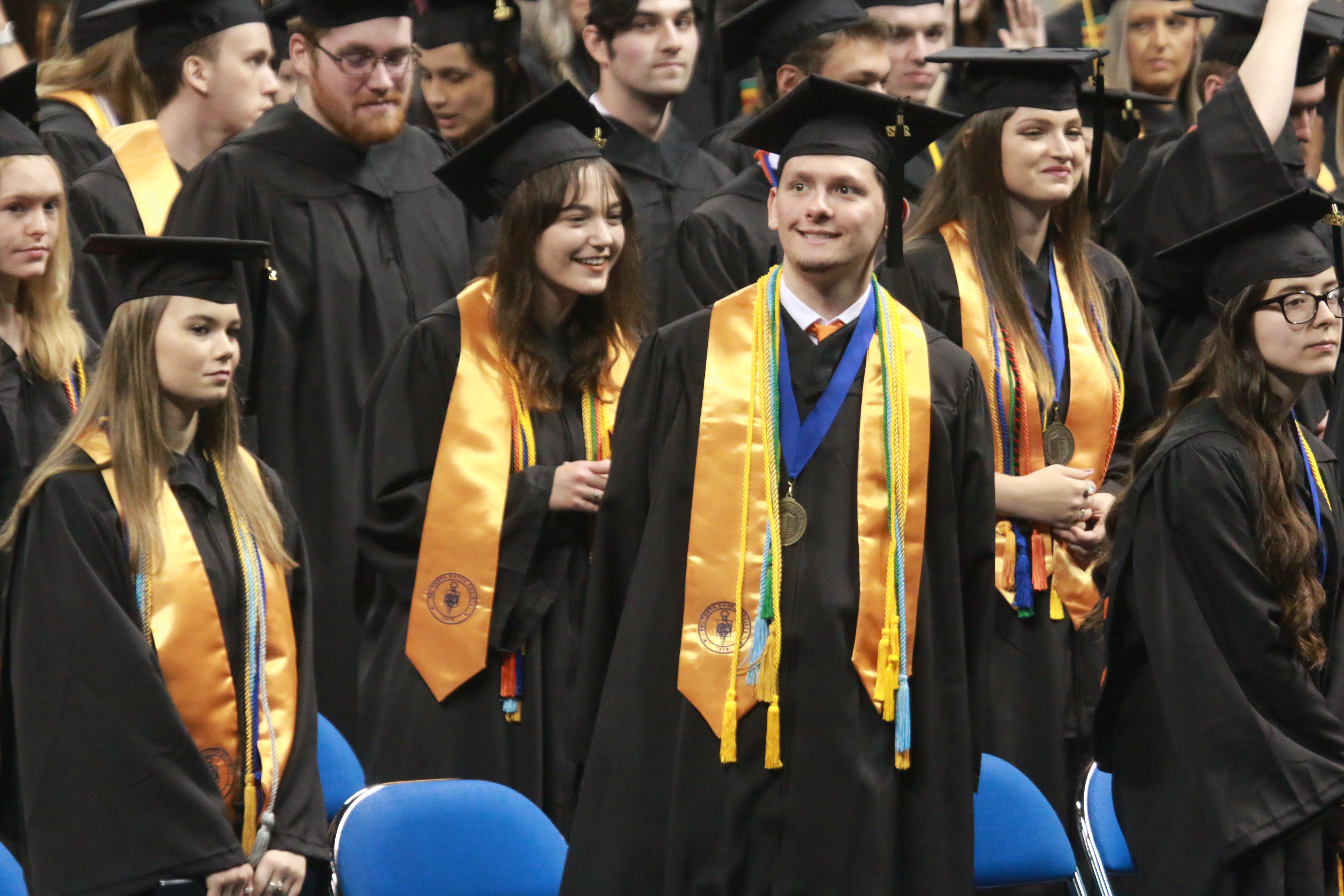 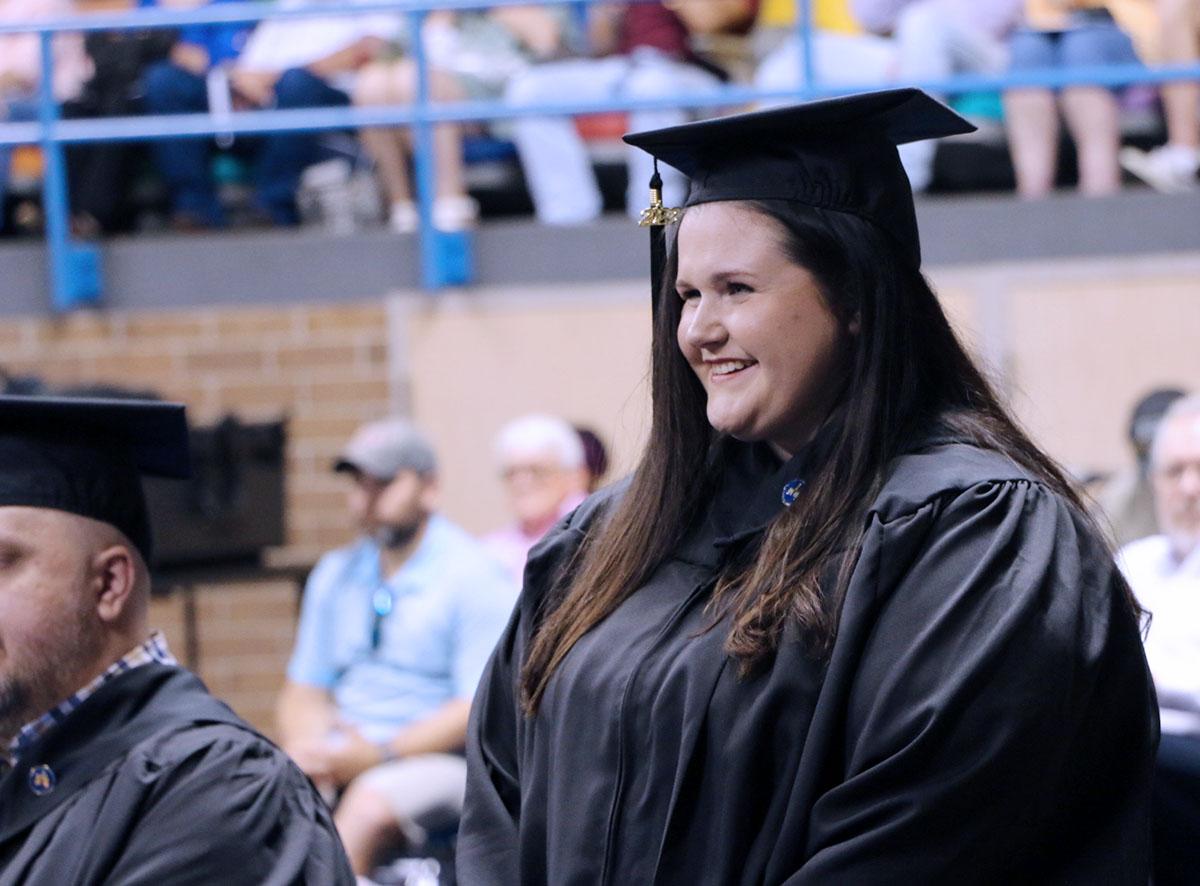 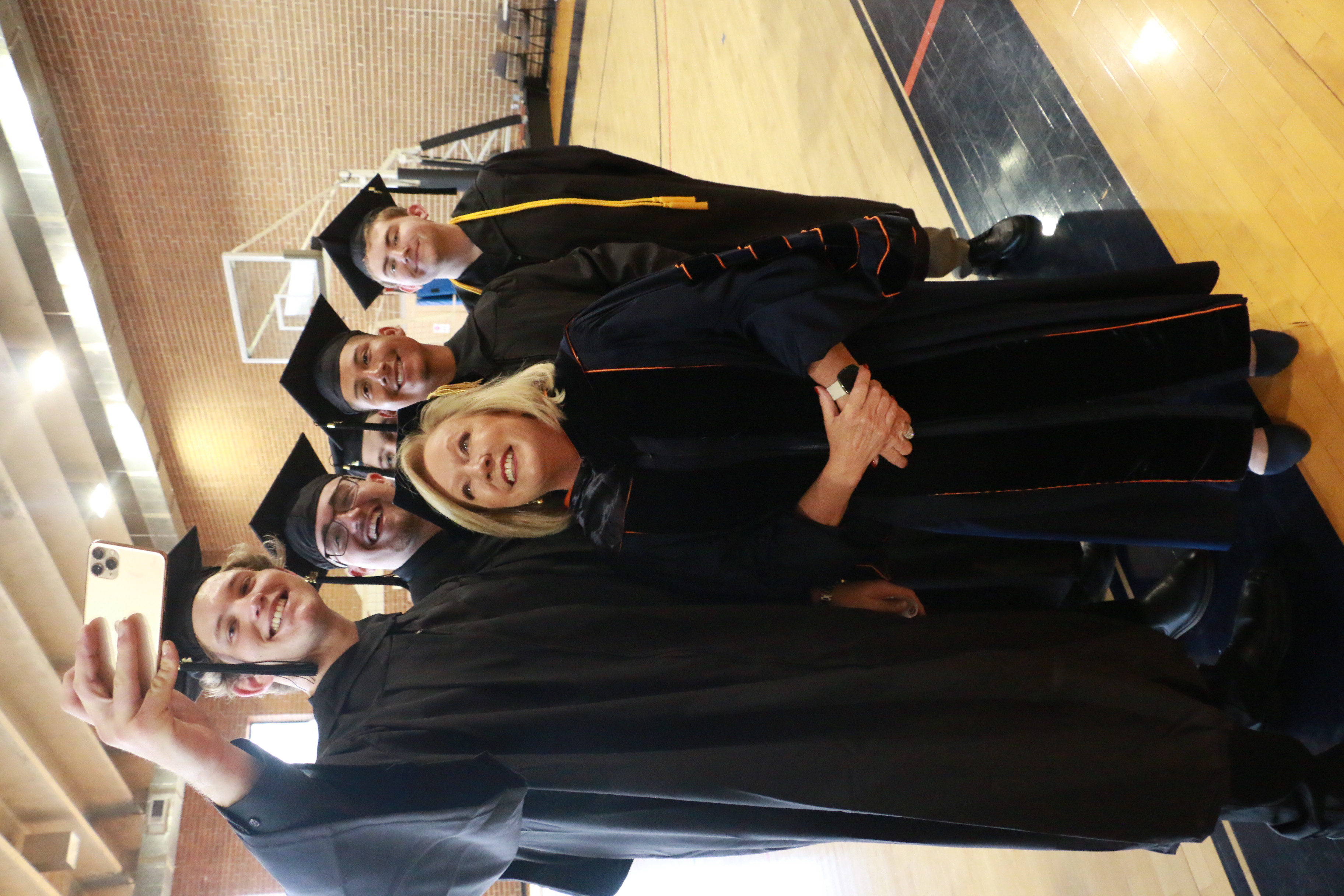 Criminal Justice graduate and Wallace State softball player Olivia Ball is all about protecting and serving. She will transfer to the Police Academy in Jacksonville after the softball season is over, but first she and her team will participate in the NJCAA National Tournament in Yuma, Ariz.

But her road to success did not come without a few roadblocks in the form of two season-ending injuries and one season cut short by COVID.

“Never give up became her mantra,” Dr. Karolewics said. “When asked what inspires her, she said she wants to make an impact, to be a force for good. Congratulations Olivia. You are a shining example of how determination and service above self-lead to success.”

Lisa Markey’s road to graduation was a long one. She graduated high school in 1987 and fully intended to earn a college degree, but life got in the way. She kept trying, attending six different universities in four states as her family traveled for employment reasons. She even developed a successful career in human resources, but still wanted to earn that degree.

After meeting and seeing the quality students coming out of Wallace State, Markey decided to enroll at Wallace State to obtain her degree in Business Management and will start classes next week at Athens State to work on a degree in Human Resources Management.

“Lisa believed C.S. Lewis when he said, ‘You are never too old to set a new goal or to dream a new dream,’” Dr. Karolewics said. “You are exactly right, Lisa. Congratulations on this accomplishment and those to come.”

Like many youngsters, Alexander Hamilton dreamed of being both an astronaut and archeologist when was a child. By the time he became a junior in high school, he had not settled on a career choice and doing the same thing every day did not appeal. Added to that, Hamilton was diagnosed with Tourette’s syndrome when he was in the fourth grade, which manifested itself with a number of tics, anxiety and a stutter. Be he refused to allow that to hold him back.

Hamilton graduates from Wallace State with a degree in General Studies and plans to transfer with a full scholarship to study communications at Middle Tennessee State University, where will be an honors student and ambassador, a role he also filled at Wallace State.

“You have been a wonderful ambassador to Wallace State, Alexander, and we congratulate you,” Dr. Karolewics said.

Diesel Technology graduate Argin Dooley said he was hooked the first time he took a tour of the program as a high school freshman. He enrolled in the Fast Track to Industry program at Wallace State and graduated from the college more than a week before he graduates from Cold Springs High School.

“He’s been working as a Field Technician “C” for Thompson Tractor Company in Huntsville since January, traveling the state to work on and service machines. He says some customers are shocked that someone as young as him has the experience and desire to reach the technician level he has. His goal is to earn the Master Technician status and work with heavy equipment.

“Argin credits the Fast Track to Industry program for helping him pursue his dreams and changing his life for the better,” Dr. Karolewics said.  “Congratulations, Argin. Your ambition and drive to succeed assure that every goal is within your reach.”

Computer Science graduate Connor Glass didn’t know where he would be four years ago. He’d just been released from federal custody for a non-violent offense and had to decide in which direction his life would go. He chose the uphill battle of making a better life for himself and his son, who he could then only see during supervised visitations.

Glass followed his passion for computer science and enrolled in Wallace State. He completed his degree and also became an entrepreneur, opening his own company that provides network services and installations to his clients.

“Congratulations Connor on making the best choices for you and your son, and good luck in your future endeavors,” Dr. Karolewics said.

Pre-Engineering graduate Enrique Castro made a big impact at Wallace State, but not many people may have realized it. Castro served as Wally, the college mascot.

“He often goes unrecognized because he is always in costume and has done such a great job maintaining anonymity so that Wally can shine,” Dr. Karolewics said. “He has represented Wallace State at countless events on campus and in the community.  His leadership is remarkable, and he goes out of his way to volunteer for ways to serve.

“Enrique has had an outsized influence on our campus the past two years, and we are so excited to be able to recognize him today,” Dr. Karolewics added.

Respiratory Therapy graduate Kelly Calvert was recognized for overcoming negativity to complete her education. Calvert started Wallace State as a dual enrollment student. She married young and put aside her dreams for more than four years before deciding to come back to college. She earned a certificate in Phlebotomy at Wallace State before pursuing her dream to become a respiratory therapist.

“For anyone else facing negative forces in their lives, Kelly would tell them you can accomplish your dream,” Dr. Karolewics said. “And we would add that Wallace State is here to help you do just that. Congratulations, Kelly, for achieving your dream.”

Occupational Therapy Assistant graduate Ashely Ball knows exactly how her future patients feel, because she benefited from the expertise of OTAs and other medical professionals after she suffered serious injuries in a motor vehicle accident in 2019.

“Ashley entered the Wallace State Occupational Therapy Assistant program knowing that she would need to work harder than an average student,” Dr. Karolewics said. “Her goal is to be encouraging to those who need help overcoming the most difficult situations to achieve their goals. She plans to use her past experiences in her new career to encourage others as they strive to regain their own independence.”

Nursing graduate Ebony Crume overcame failures, depression, anxiety and family responsibilities to complete here degree in nursing. After not completing at another nursing school in 2017, Crume was crushed and admits she came close to giving up on life itself due to all the burdens she was bearing. But an opportunity arose for her at UAB to complete a degree in Healthcare Management, a four-year degree which she completed in two and a half years, and which led her back to her original dream of becoming a nurse.

After applying and getting accepted into Wallace State’s Nursing program, she was determined to finish this time, no matter the obstacles in her way. She was still battling depression, anxiety, illness and was driving back and forth nine hours to Chicago to check on her mother suffering from end-stage Alzheimer’s. Her determination and the promise she made to her mother not to quit paid off with her walking across the stage at graduation.

Nursing graduate Nicole Fountain dropped out of high school and began raising a family. The mother of seven children ages 8 to 24 years old survived an abusive relationship that defeated her confidence and self-worth.

After a 15-year break from any form of education and years of caring for others, Fountain earned her GED from Wallace State in 2018 and began her journey in nursing school. It was fraught with personal challenges: her own cancer diagnosis, major surgery for one of her children, the deaths of close family members, and helping her children navigate online learning as a result of the COVID-19 pandemic.

Fountain graduated Friday with an associate’s degree in nursing to accompany her certifications as a phlebotomist, certified nursing assistant and licenses practical nurse.

Special awards were presented to students chosen for the Presidential Award for students in the Academic, Applied Technology and Health Science divisions. These awards go to students of superior achievement in each area and are the highest academic honors presented at graduation.

Music was provided by the Wallace State Concert Choir and Concert Band. Class of 2022 graduate McCoy Cleghorn sang “America” for both audiences.

Wallace State has educated hundreds of thousands of students since opening its doors in 1966, and tens of thousands have had degrees conferred. The college is nationally recognized for its work in student success.

Both events were livestreamed.